Cooper Standard reported sales for the third quarter of $585.7 million, an increase of 13.1 percent over the third quarter of 2009. The company’s sales for the first three quarters of 2010 were $1.8 billion, an increase of $442.7 million, or 32.4 percent, from the same period in 2009. The increase was primarily due to an improvement in automotive production volumes in most regions of the world.

The company posted net income for the third quarter of $20.8 million compared to $10.8 million in the previous year. The improvement was due to the increase in automotive production volumes and the company’s improved cost structure.

“Cooper Standard continues to exhibit strong financial performance in 2010 as a result of improving production volumes and our streamlined cost structure,” said Jim McElya, chairman and CEO, Cooper Standard. “We are pleased with our third quarter results and continue to evaluate economic and industry trends so we can capitalize on opportunities and navigate any headwinds.”

Key Launches
During this quarter, Cooper Standard successfully launched production in all global regions with programs for a variety of automakers, including:

Management considers EBITDA and adjusted EBITDA as key indicators of the company’s operating performance and believes that these and similar measures are widely used by investors, securities analysts and other interested parties in evaluating the company’s performance. Adjusted EBITDA is defined as net income (loss) adjusted to reflect income tax expense (benefit), interest expense net of interest income, depreciation and amortization, and certain non-recurring items that management does not consider to be reflective of the company’s core operating performance.

When analyzing the company’s operating performance, investors should use EBITDA and adjusted EBITDA in addition to, and not as alternatives for, net income (loss), operating income, or any other performance measure derived in accordance with GAAP, or as an alternative to cash flow from operating activities as a measure of the company’s performance. EBITDA and adjusted EBITDA have limitations as analytical tools and should not be considered in isolation or as substitutes for analysis of the company’s results of operations as reported under GAAP. Other companies may report EBITDA and adjusted EBITDA differently and therefore Cooper Standard’s results may not be comparable to other similarly titled measures of other companies. In addition, in evaluating adjusted EBITDA, it should be noted that in the future Cooper Standard may incur expenses similar to the adjustments in the above presentation. This presentation of adjusted EBITDA should not be construed as an inference that Cooper Standard’s future results will be unaffected by unusual or non-recurring items.

An interactive webcast will also be available via http://www.cooperstandard.com/investor_home.php or http://investor.shareholder.com/cooperstandard/eventdetail.cfm?eventid=88016.

To participate in the live question-and-answer session, North American callers should dial toll-free (800) 949-4315 (international callers dial (678) 825-8315) and provide the conference ID 21628865 or ask to be connected to the Cooper Standard third quarter teleconference. Callers should dial in at least five minutes prior to the start of the call. Financial and automotive analysts are invited to ask questions after the presentations are made.

Individuals unable to participate during the live teleconference or webcast may visit the Investor Relations portion of the Cooper Standard website (http://www.cooperstandard.com/investor_home.php) for a webcast or podcast replay of the presentation. 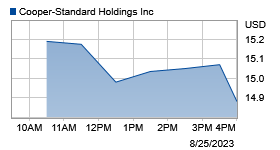 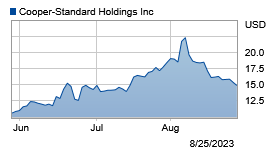 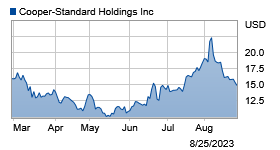 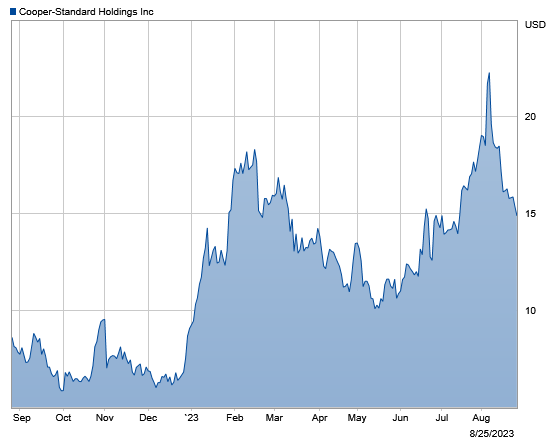